Typically, during the course of a year about a dozen comets will come within the range of amateur telescopes. Most quietly come and go with little fanfare, but some are particularly noteworthy.

During the upcoming weeks, a newly-discovered comet will be making a relatively close approach to the Earth. On Feb. 1, comet C/2022 E3 (ZTF) will pass to within 28 million miles (42 million km) of our planet, its first approach in 50,000 years. While this will no doubt entice many skywatchers to attempt to view the comet, whether or not one will actually be able to see it will depend on a variety of factors including location and light pollution from both natural and artificial sources. 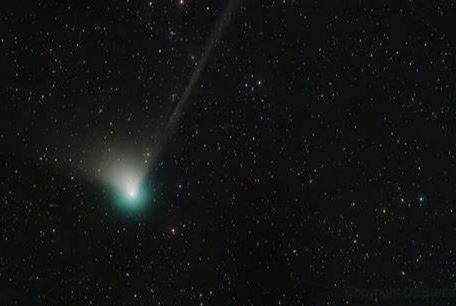 But don't be dismayed! if the conditions to see comet are poor due to the weather. There are Virtual Telescope Projects that will be hosting a free livestream of the comet beginning Jan. 12. You can watch the live webcast courtesy of the project's website(opens in new tab) or on its YouTube channel

Discovery and history
On March 2, 2022 astronomers Frank Masci and Bryce Bolin using the Zwicky Transient Facility (ZTF) at the Palomar Observatory in Southern California, came across an object which they initially identified as an asteroid. It appeared very dim — it was estimated at magnitude +17.3 — or nearly 25,000 times fainter than stars at the threshold of detectability using just the human eye. Subsequent observations revealed that this star-like object possessed a very tightly condensed coma, indicating that it was in fact, a comet. It was the third such object discovered in the fifth half-month (A, B, C, D, E) of the year, so it received the designation C/2022 E3 (ZTF). At the time, the comet was situated 399 million miles (643 million km) from the sun, or just inside the orbit of the planet Jupiter.

After enough observations were gathered to compute an orbit, astronomers determined C/2022 E3 to have an orbital period of roughly 50,000 years. Its last passage through the inner solar system apparently came during the Upper Paleolithic or Old Stone Age. If we take these calculations at face value, then the last people to look up and witness this visitor from the depths of the outer solar system, were likely very early Homo sapiens or Neanderthals.

But this may very well be the last time that C/2022 E3 comes our way again. The latest orbital elements suggest that the comet is currently traveling on an orbital path with an eccentricity of 1.00027, or in other words, a parabolic orbit. Such an orbit is not closed, so after it sweeps around the sun C/2022 E3 will move back out into deep space, never to return again. So, this will be the comet's last time to "perform" for us. We know that comets are composed primarily of frozen gases that are heated as they approach the sun and made to glow by the sun's light.

We call this cloud of gas the head or coma.

As the gases warm and expand, particles of dust that were embedded in the comet's nucleus are also released into space. The solar wind blows this material out into an appendage we call the tail. To observers of antiquity, comets resembled a stellar head trailed by long hair, so they called comets, "hairy stars."

What: This event is open to the public or viewing to Comet from various telescopes on the observing field. you are welcome to bring your own binoculars, telescopes, etc. And dont forget -dress warm!

NOTE: Please refer to the page before you travel to the site as status may change due to unforeseen situations such as the weather.may not be favorable to observe or a new date and/or times posted.

Below is a shot of where the comet will be